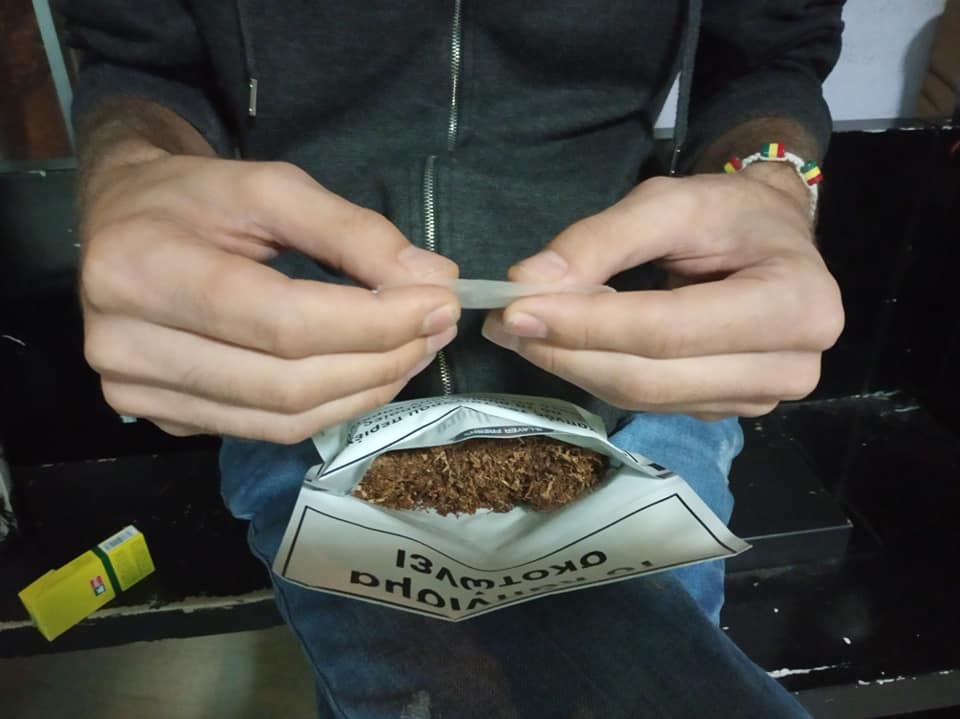 This is one in a series of interviews with people involved in the Notara 26 squat in Exarcheia, Athens. The struggle for the free spaces here is made up of people with very different backgrounds, life stories and ideas. We aim to record people’s own words without imposing our views – though of course we can’t escape our own perspectives, or the limits of translation.

After we entered Greece, me and my two friends, they put us in the closed camp of Filakio. After ten days they released us and we went to Thessaloniki. We reached the camp of Diavata but they told us they had no room for us, so we decided to try Athens.

We were in Victoria Square, we spent two nights on the street. We were looking for a house but we couldn’t afford anything, it was like 300 or 400 euros. Then an Iranian anarchist friend who was living in Germany told us about Exarcheia and the squats. We headed for Exarcheia and, by chance, found ourselves at Notara.

When we came to the door, at first they said they only had room for one person, not all three of us. But they invited us to come in and eat some food. Then, as we were leaving, they said: “guys, stay, we will find a way to make room for you”.

When I was a student in Tabriz university, in the north-West of Iran, I got involved in political activities more than before. I did a BA, then I was studying for a masters in sustainable management and development. I was also involved in student associations and writing in student journals. And, though I wasn’t a member, I was a supporter of one of the political parties linked to the Kurdish movement, which was illegal.

One day the security department of the university called me and some other friends to a meeting. They accused us of trying to organise a strike in the university, and also of recruiting students to go and fight against ISIS in Kobani, in Rojava. They said if any strike or protest happened, even if I was far away, they would blame me. They cut off my student services and took away my room on campus.

Then one day I got a phone call from a friend. He said the security forces were looking for me at the university. At the same time, two other friends I was working with were arrested in Sandanaj town. I decided to leave Iran that day, and went to Turkey.

Turkey was the most horrible experience in my life. I escaped from Iran because I didn’t have freedom there, but the situation I found in Turkey was even worse.

I continued my political activities in Turkey, coordinating two campaigns and writing for websites. I registered with the UNHCR as an asylum seeker, but the Turkish state blocked me getting documents.

When all responsibility for registering refugees was transferred from the UNHCR to the Turkish state (in 2018), that meant all my personal details were handed over. As a Kurdish person involved with the movement that could be very dangerous for me. At the same time, more friends were arrested and put in prison charged with supporting terrorist groups. Like many other people in similar situations, I decided I had to leave Turkey as well.

I want to say it like this. The first day I arrived here, after my experiences in Iran and Turkey, I was very cautious. I held back from getting involved for a while, just checking everything out carefully.

Then, when I started to learn about the movement and ideas behind the squat, and see how people were doing things, I started to get more involved. I met the people working in solidarity with the squat and found them close to my political opinions. I found that I was living in a place with a strong collective life. I feel really happy to be part of this big family.

After I was here two months, the state and police, in a fascist turn, started attacking the squats. I want to be a part of the movement resisting this. I try to always participate in demos, gatherings, any kind of activities I can against these state operations.

What does Notara mean for you?

In brief, it means struggle and resistance. It means we are going to tackle any issues and problems together, side by side. Without hierarchy and inequality between people we can find the deep meaning of humanity, how humans can really be. Notara is this idea, and the idea will never die.

The future? For the future, everything is very clear. We only have one choice – to keep fighting.