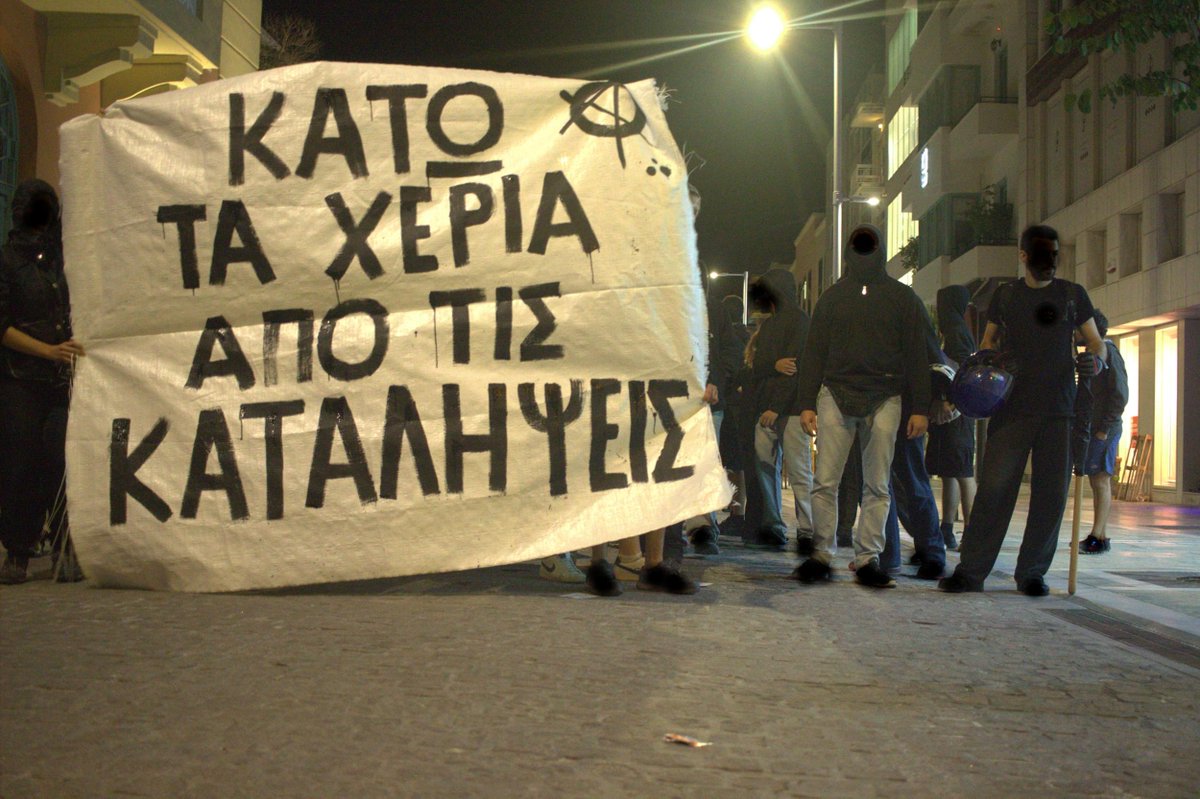 Demo in Heraklion, Crete against evictions

The past few weeks have seen an intensification of the Nea Demokratia government’s efforts to subdue the Greek anarchist movement and crush initiatives that offer alternatives to prison society. In particular, the anarchist neighbourhood of Exarchia in Athens has been a focal point for its aggression. A rough chronology of this repression as well as actions of solidarity and resistance taken by comrades in Athens is listed below.

The current rumour is that the State wants to evict ‘all squats’ by 17th November. Another rumour puts the deadline at 6th December. Both are significant dates in the history of the Greek anarchist movement, which are marked by annual riots. What ‘all squats’ means is not entirely clear. What is clear from the past few weeks however, is that attacks have been made on squats both inside and outside Exarchia, and as well as in cities in other parts of the country.

The State’s first focus for attack on occupied spaces has targetted the numerous squats that offered alternative housing to the dire state-run camps for migrants. These were self-managed spaces inhabited by migrants, anarchists and anti-authoritarians, often of considerable size. They were largely concentrated in Exarchia.

This was followed by three more evictions in September (5th School in Exarchia, the Jasmine squat in nearby Archarnon street and another one near Jasmine).

Most recently in October, they evicted another Exarchia occupation, Oniro. Residents were loaded onto buses and taken to camps; their belongings were thrown away. In all, hundreds of refugees have been removed from these self-organised spaces and taken to state run camps and prisons. There are still a few migrant housing squats still standing in Exarchia, but they remain on high alert of eviction.

As well as evictions, serious legal and policy developments have been made which attack rebels across the country.

– The abolition of the university asylum law. This law had largely prevented the cops from entering university campuses since the 1973 uprising against the dictatorship. The uprising was centred around the Politechnic University and resulted in a massacre by state forces there. Occupied spaces have been a traditional feature of many Greek universities and key infrastructure of the country’s anarchist and anti-authoritarian movements. The law had been much contested in recent years, until it was abolished in August, which is expected to make it a lot easier for the state to evict many squats.

– The reintroduction of the ‘Delta’ cops, rebranded as DRASI (‘action’). This notorious and particularly vicious gang of biker cops was disbanded in 2015, but has been brought back by the new government and is now back on the streets.

– New laws to further criminalise resistance. For instance, a maximum 10 year prison sentence for being found in possession of a molotov, and the creation of penalties for inciting riot or illegal acts, and for making interventions in state buildings.

Brief chronology from the past few weeks

Riots break out on Patission near ASOEE university in solidarity with the insurrection in Chile.

A student demo takes place against the abolition of the university asylum law and education reforms. Students attack cops with flagpoles.

A demo in solidarity with the insurrection in Chile starts at the Chilean embassy and winds back to Exarchia.

• Eviction of Vancouver Apartment squat in central Athens, which had been occupied for the past 13 years. The squat was on property belonging to ASOEE, the Economics and Business university.

The cops take the unusual move of doing the eviction on a Saturday, when the university is closed and many students are not around to intervene. The move also comes on the morning of a significant demo against attacks on squats and migrants, which Vancouver had been publicly supporting. During the eviction 4 comrades are arrested, while one of the cats is killed by a police dog. The other 3 cat residents are effectively buried alive as the building is then knowingly sealed with the cats trapped inside.

There are ongoing legal efforts to free the remaining cats, since a squadron of riot cops have been guarding the building and all entrances are bricked up.

• The same morning, some of the riot cops permanently stationed around Exarchia attempt to smash down the door of Notara, one of the largest and few remaining migrant squats in Athens. This follows threats and insults which were shouted by cops in the preceding days, including shouting “Raus!” (reference to ‘Juden Raus’ a phrase used by Nazis meaning ‘Jews out’).

• A demo of around 1000 people takes place in solidarity with migrants & in defence of squats and self-organised spaces, called by the open assembly of squats, migrants, internationalists and solidarians. The demo winds through migrant neighbourhoods and is characterised by multilingual banners, leaflets, stencils and chants. Following the demo, there are molotov attacks on the police in Exarchia as an immediate response to the eviction of Vancouver. The police respond with teargas and flashbangs, and two people are arrested at random in the neighbourhood.

• In the migrant prison of Petrou Ralli, Athens, 16 female detainees start a hunger and thirst strike for their release and transfer back to the islands

• Another student demo takes place in central Athens. Students attack the cops with molotovs and the police fire tear gas.

• The media reports that riot cops are attacked on three separate occasions in different locations throughout the day.

• Several hundred people protest in solidarity with Notara squat, a prominent migrant squat in Exarchia that is home to up to 100 refugees, including many kids, and is under threat of immediate eviction. Notara is a large building that has been occupied since 2015.

• Clashes with the police take place in Exarchia which results in damage to one cop’s bike and the cop being sent to hospital. The police then rampage through Exarchia and besiege people in a popular cafe. 16 people are reported arrested.

• Attack on Libertatia squat in Thessaloniki. Libertatia was significantly burnt down after being firebombed by fascists in 2018. At least four people are arrested.

• Police carry out an operation which results in (according to the media) searches on 13 homes and the detention of 15 people, 3 of which end up with charges. The press reports that it is an ‘anti-terrorist’ operation related to historical incidents and that weapons have been seized. Numerous people report being followed, harassed or raided by anti-terror cops.

• A demo in central Athens in defence of squats called by No Pasaran assembly is attended by hundreds of people.

• Dozens of people hold a demo in solidarity with the Petrou Ralli hunger strikers at the migrant prison, shouting slogans in different languages for the detainees.

• The polce raid ASOEE, the university of economics and business, and evict a steki. Images of seized helmets, sticks and bottles are shared widely by the media and used as a pretext by the academic council to shut down the university until 17th November.

• A group of around 100 leftists break the lockout and enter the university. The police enter the premises, attacking people, firing gas and besieging the group of students. A stand off ensues as a crowd of many hundreds gathered on the busy road outside, forcing its partial closure. The police eventually leave, and a spontaneous march of 1000+ students follows.

• Some people are arrested during the siege. One of the students who was apparently outside ASOEE during the clashes was later arrested outside his home and his house was raided.

• Police evict Bouboulinas squat in Exarchia, home to dozens of refugees. They are initially taken to Petrou Ralli detention centre, where a solidarity demo is held outside. Most are then bussed off to Amygdaleza migrant camp, but many occupants refuse to get off the buses. Some of the residents of Bouboulinas resist attempts to be split up and divided into ‘legal’ or ‘illegal’ migrants.

• At a solidarity gathering at court for arrestees, the cops fire tear gas and flashbangs in an unprovoked attack.

• A demo winds through the residential neighbourhood of Kypseli in defence of squats and against the state repression. The demo is called by Lelas Karagianni 37 squat which has been occupied for 31 years.

——————
Needless to say, acts of international solidarity would be very welcome. Developments continue to unfold quickly. For further updates see https://athens.indymedia.org or for frequent English updates check out @exiledarizona on Twitter. 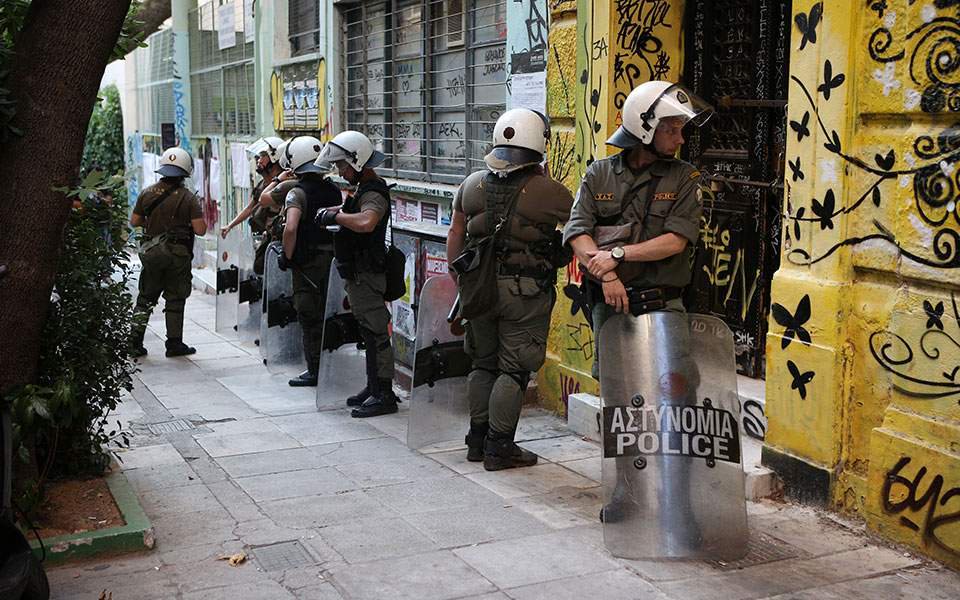 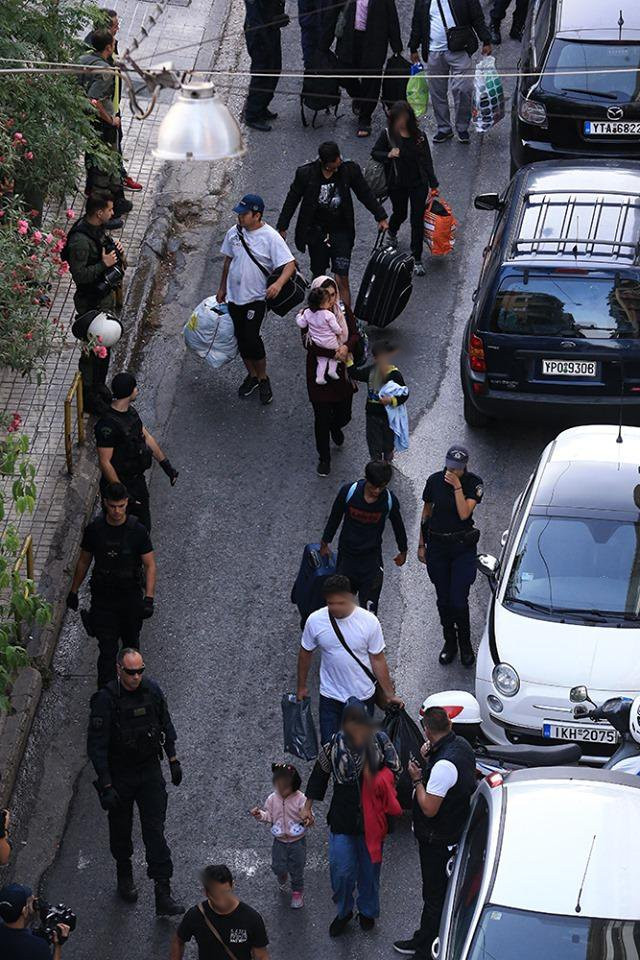 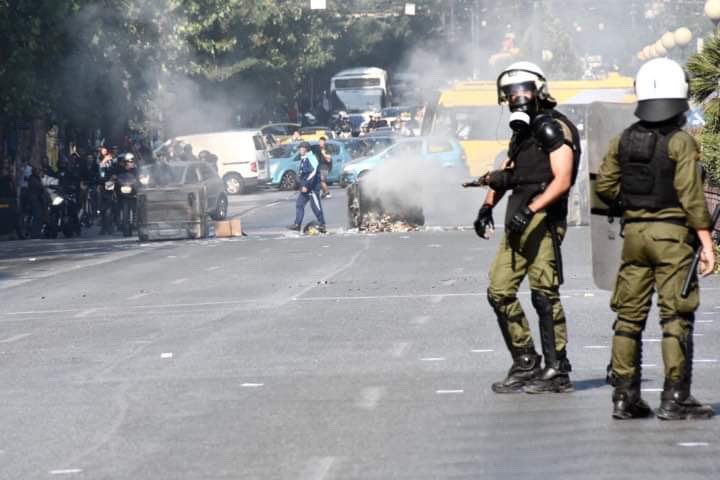 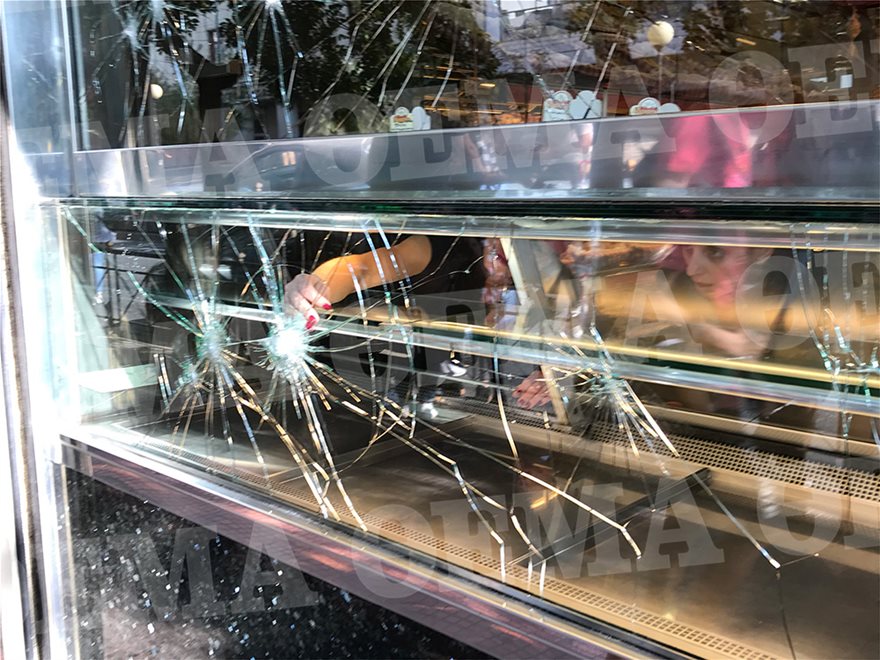 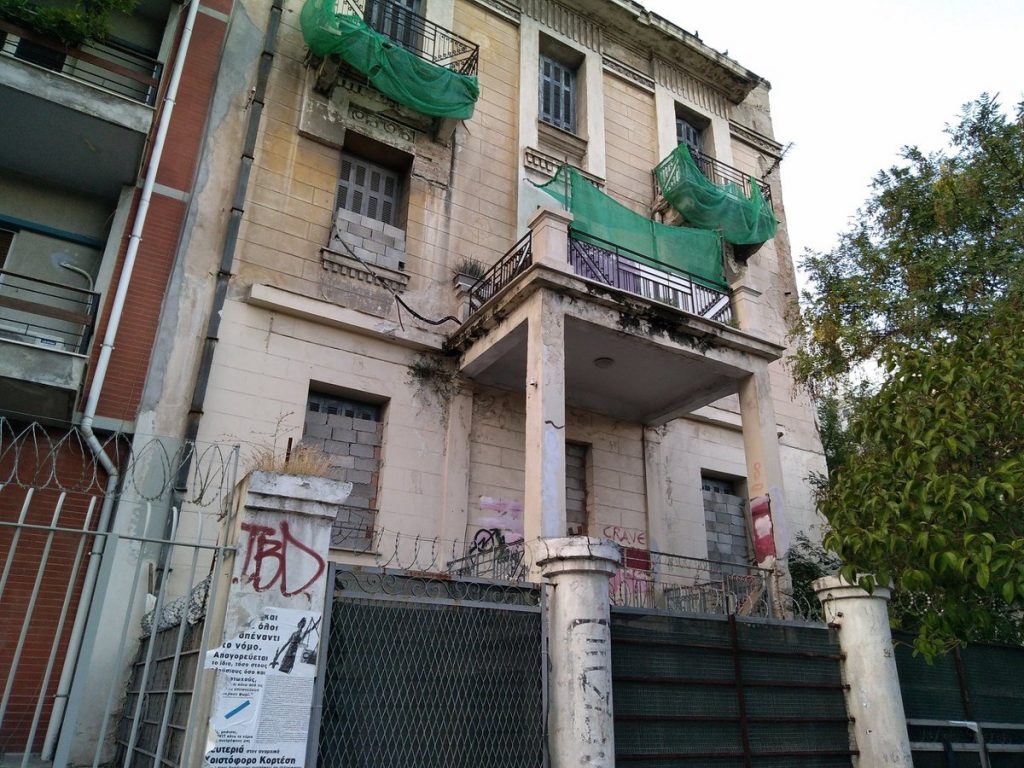 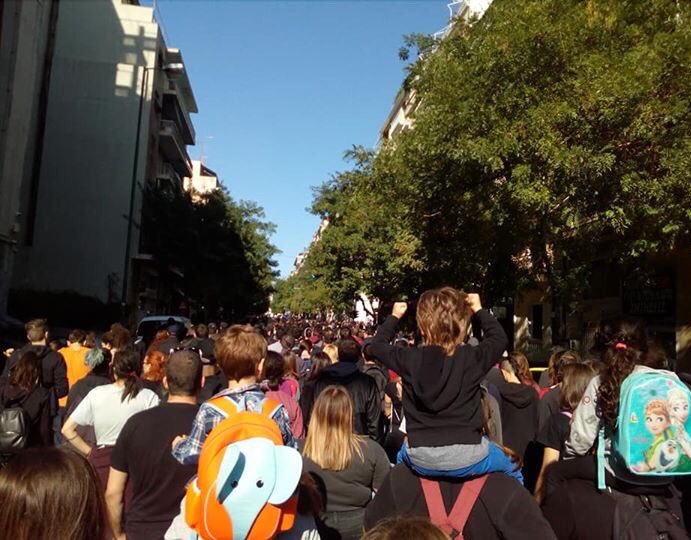 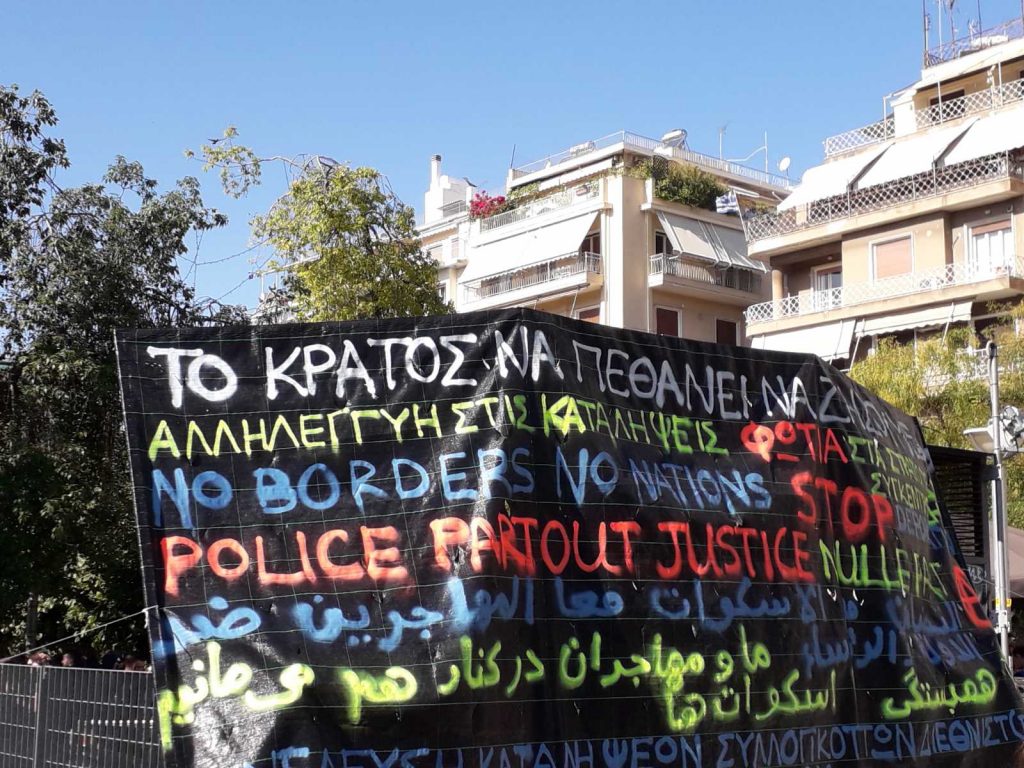 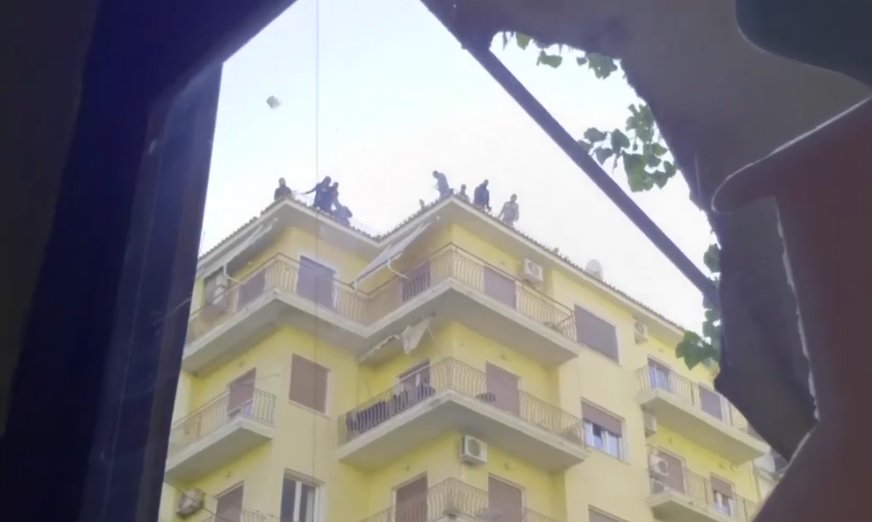 Attack on the cops in Exarchia following Vancouver eviction 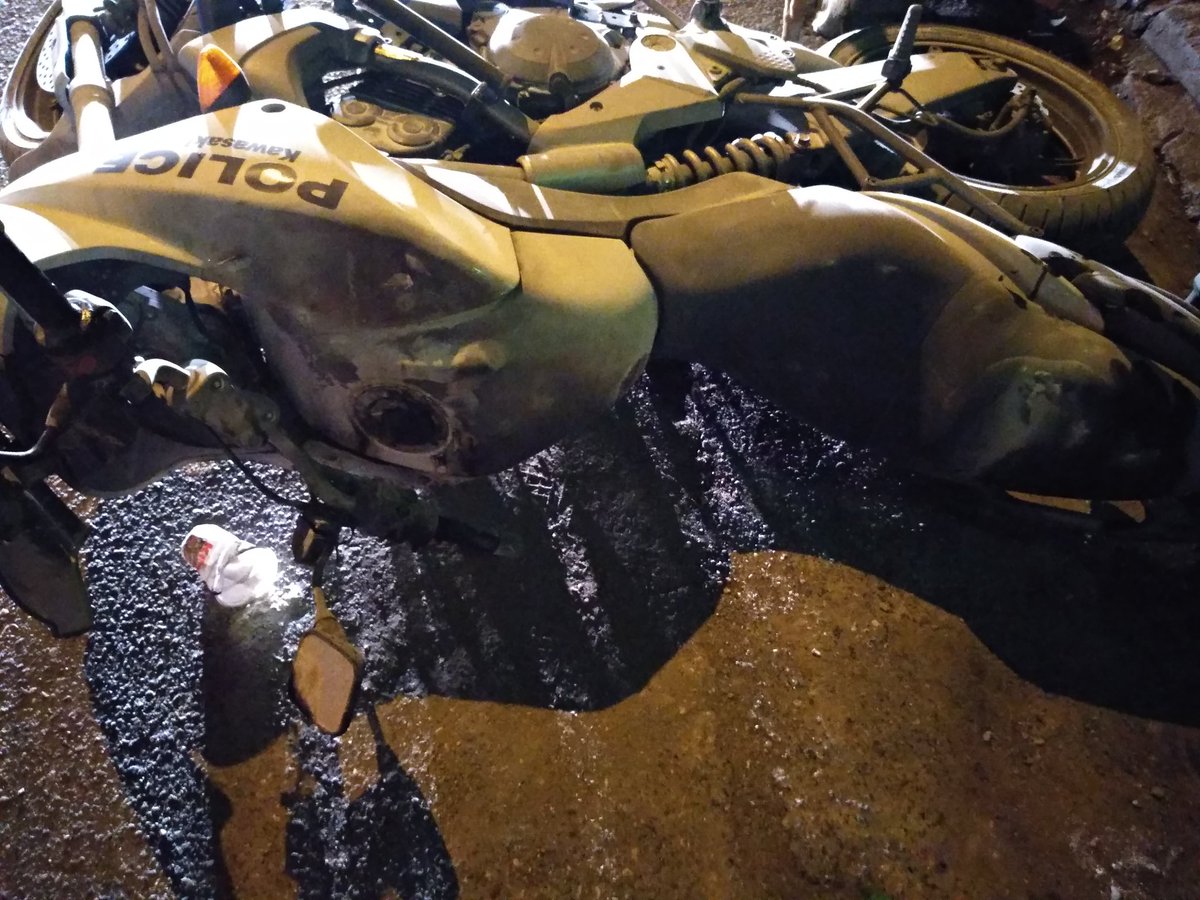 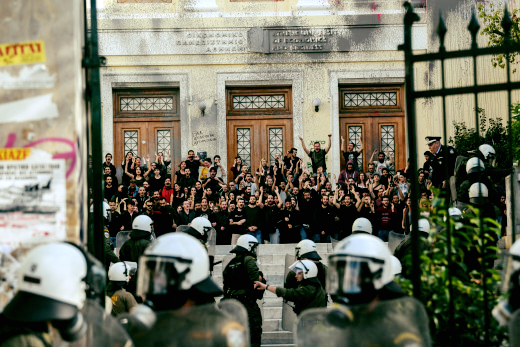 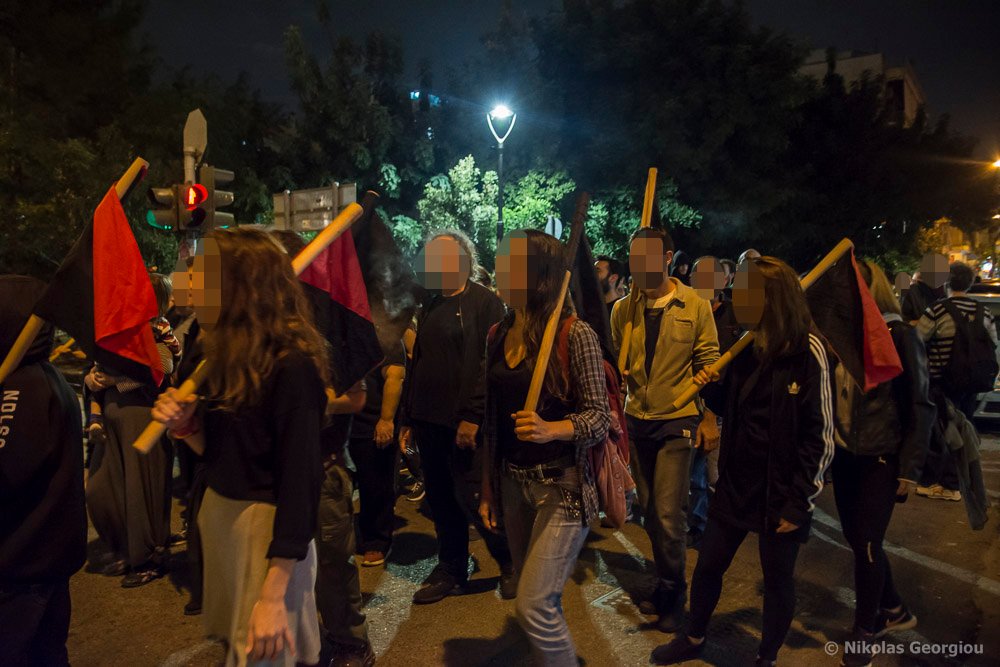 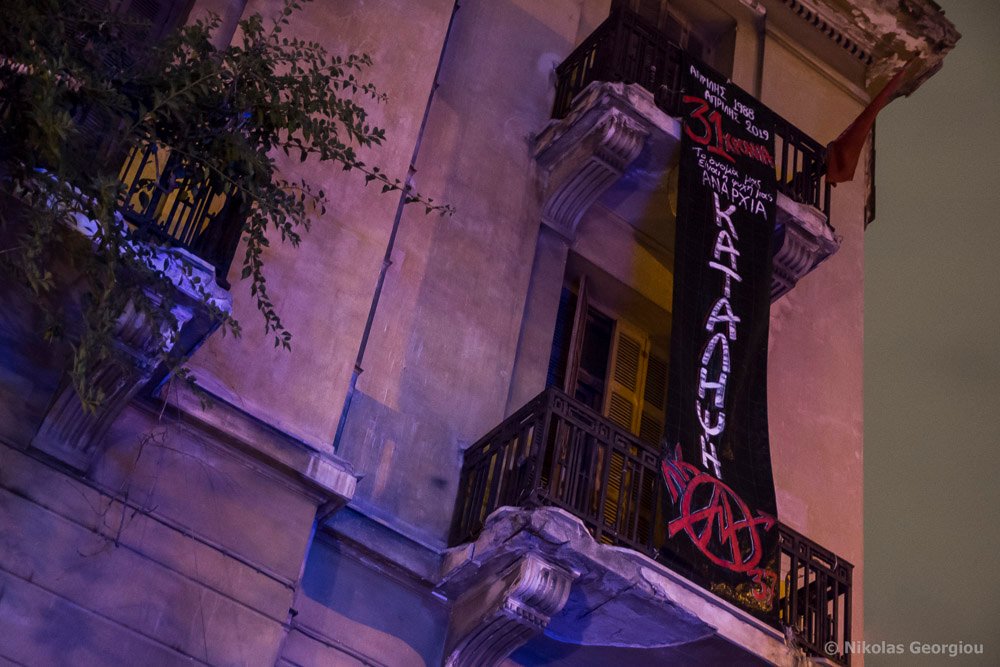